Play (2015)
based on Seamus Heaney’s translation

Adapted for the stage by
David Gullette 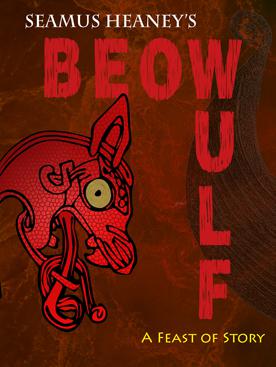 A passionately delivered and interestingly conceived theatrical rendition of the Scandinavian epic in a translation by the great contemporary Irish poet.

Seamus Heaney (1939-2013), the great contemporary Irish poet who taught at Harvard for many years and who died in 2013, provided the translation of the Scandinavian epic that forms the basis for this interesting and evocative production. David Gullette, Literary Director of The Poets’ Theatre, adapted Seaney’s liltingly accessible translation of Beowulf (2000) for this stage version. The production is a wonderful tribute to the beloved and recently deceased poet with many local connections.

The story of the epic is basically a series of conquests by Beowulf, the Geatish hero (from the south of what is now Sweden), of monsters that are threatening the lives and sanity of the Danes under King Hrothgar.

Their Mead Hall is being attacked by the dismal monster Grendel and Beowulf takes it upon himself to strike the demon down. But peace does not last long. Soon Grendel’s fierce mother, who lives at the bottom of a dastardly lake, goes on the attack, and Beowulf is put upon to not only fend her off, but goes down to the bottom of the lake to do so. He succeeds and after appreciative consorting with the Danes, Beowulf returns to Geatland where he becomes king.

Things go along apace for fifty years until the next and final challenge, when, for a third time, Beowulf has to confront a demonic opponent and this time it’s a dragon. Beowulf again succeeds, but at the cost of his own life. Upon his death, he is buried in a great pyre by the sea while his people grievously mourn his loss.

Written somewhere between the 8th and 11th centuries, Beowulf is the only surviving epic in Old English (Chaucer’s The Canturbury Tales [1387-1400] is written in Middle English). 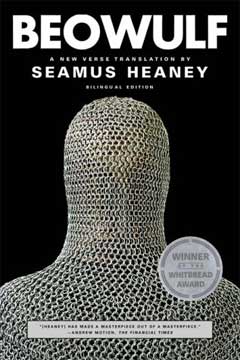 The show opens with the commanding presence of David Gullette (Second Poet), stirringly reciting enough of the beginning of the epic in the original to give a rich sense of its rhythms and lilt. Gullette, whose forceful and evocative delivery provides resounding support throughout the performance, notably in the persona of the Danish King Hrothgar, also did the adaptation of the text from the Heaney translation. He is a long-time affiliate of The Poets’ Theatre, going back to its original incarnation in the 1960s and currently serves as its Literary Directory.

In addition to Gullette’s fine work, the acting in this rendition of the poetic epic, under Benjamin Evett’s capable direction, is strong and evocative.

Amanda Gann (Third Poet), bearing beautifully adorned facial inscriptions, also provides excellently dramatic renderings of the text in her vividly articulated account. Punctuated and strong, she gives power and gravitas to each line of her delivery, a sense of the mythologically cathartic quaking within each syllable.

Beowulf: A Translation and Commentary by J.R.R. Tolkien was edited by Tolkien’s son Christopher and published in 2014 from a translation Tolkien worked on in the 1920s.

The three actors who bring much of the action to life in their roles as the Thanes, Rebecca Lehrhoff, Jesse Garlick and Rackel Wiese realize the supplementary dramatizations and choreography effectively.

The production is very well acted, dramatically interesting and a vivid account of the medieval Anglo-Saxon epic.

The play does goes on for awhile, with brief musical interludes instead of intermissions, and might have benefited from a little further cutting and some slightly more obvious way to set off the various episodes from one another. Though it’s a great epic, the dominant subject-matter is the battling of the hero against his various monster opponents and it’s somewhat easy for those episodes to run into one another.

Despite the excellent acting and direction, there is, due to the demand of the narrative and the potential lack of distinction among the narrative elements, a lurking tendency to get lost along the trail of words. The encouragement of the audience to participate in vocalizing a phrase by the musicians during the breaks was a well-meant effort at participation, though not entirely successful as a way to sculpt and set apart the portions of the performance.

Ben Evett, who starred in the exceptional solo show Albatross based on Coleridge’s Rime of the Ancient Mariner and produced by The Poets’ Theatre at the New Repertory Theater last spring, has, with this show, continued the important mission of the theater to dramatize poetry in important and effective ways. This Beowulf, very good in many ways, contributes admirably to that mission.