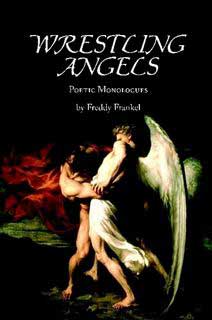 A collection of short poems based on Biblical and other noteworthy personalities related, in a very general way, to the Jewish experience.

I heard Freddy Frankel read some of these poems a few years ago and was taken by their conciseness, by their wit, and by his commitment to pursuing a variety of threads of poetic inquiry from Biblical characters outward. Frankel, now ninetyish, was born in South Africa and emigrated to the United States in 1962. He had a distinguished medical career, and served, before his retirement some years ago, as Psychiatrist-in-Chief at Beth Israel Hospital and as a member of the faculty at Harvard Medical School.

In a charming twist on ecclesiastical interpretation, he has invoked Biblical, and other related, personalities through first person poems each of which conveys a sense, not only of the narrative context, but of the intentional stance of the character involved. They follow more or less in chronological sequence, beginning with Eve (a nice departure), traveling through Jesus, Augustine and Mohammed, and winding down through Spinoza, Herzl and Balfour. The last poem is entitled God, appropriately.

Noah:
It was I slapped pitch upon the ark
squeezed it in the seams between
begins this poem and if one puts the emphasis on “I,” the full rhythmic lilt of the lines comes through, creating a sense of the momentum and intentional force behind this singularly moral, but also vulnerable, personality.
… It was I who launched
the raven – it got lost, returned worn out
precedes the conclusion, again with rhythmic force, almost suggesting the sway of the ark.

Abraham opens with a line of puzzlement and beauty –
God of unmasterable instruction
following with an account of circumcision, but echoing, in the background, with visions of Isaac on the sacrificial altar.

And in Isaac, at the outset –
Stooped with deadwood
on my back I climb
the sense of dead wood prevailing and calling forth fatality, while the sense of exertion and plodding pervade the emphases of metre.
a mad voice in his head
he stumbles up the rise
refers to his father, Abraham – a wonderfully vivid account of his father’s state – a psychiatrically attuned, yet believably childlike, articulation mapped onto the primal myth about unlimited faith

Joseph:
While still a boy I cut through
dreams, turn their contents
inside out, sifted sacred messages.
has such a wonderful sway to it, again a great observation by a psychiatrist, but adding to the “turn of contents inside out” a sense of “sifting sacred messages,” finding within those dreams not only the indications of hopes and fears, but also the germs of great ennoblement.

Solomon
I am my mother’s metaphor for failure – not
the icon of success that I appear.
A difficult, though wonderful, way of viewing the great, wise king.
… and I tire
of striving always to be wise
he says, so vivid in his confession. Characterizing his mother, David’s wife Bathsheba, who David stole from his friend Uriah, Solomon says:
… She also harps
on all my foreign wives, their idols…
But, of course, like any rebellious son –
… The more she
carps the more I decorate my palace and the temple
with royal wives who bring more gold.
Naturally! And what a great combination of poetic and therapeutic distillations this is. Bathsheba becomes not only the lusciously desirable wife of David but also a carping mother of Solomon. Love it! 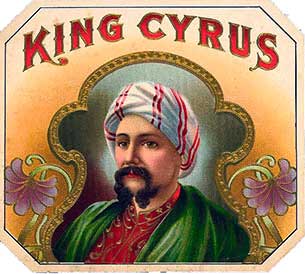 Cyrus celebrates Cyrus The Great of Persia who liberated the Jews from Babylon and enabled them to return to Jerusalem to build the Second Temple. Quoting passages from The Talmud, it follows:
… I sent them home – Jerusalem –
to grow their righteous vision…
a sweet and concise tribute to this emperor of worlds who is credited in the Hebrew Bible as a saving grace of Judaism.

Jesus: In a very human, first person, account, says –
I often held them in my hands
by speaking riddles
a telling confession of one who acts surprised at the transmutation of his reputation.
Centuries beyond my death
they say I am divine…
which provides such an unexpected quality of first person accounting, a bit uncertain, more in keeping with a meek and experimental spirit, so different from the narratives which now serve as the established authorities. A note to the poem indicates that Constantine, the great Christian emperor of Rome, called, four centuries after the death of Jesus, for a conference of bishops to declare Jesus divine, which leads naturally to…

Bishop: A witty follow-up to Jesus, this account of one of the members of the conference at Nicaea called by Constantine, includes –
I argued for a virgin birth…
and
At last we cobbled together a holy ghost,
the Holy Spirit of Father and of Son –
Finally, with quite a corker –
… Ingeniously we
settled God’s paternity suit.
And in a fabulously concise philosophic assessment of the relation between deliberation, myth, communication, and compromised deliberation –
… Faith and reason
never meet without finesse, keystone of
religion’s arc – its unsuspected artfulness.
But, the poem is gracious, calling that compromised deliberation finesse, a beautiful articulation by an adherent who sees the process for what it is while being a full participant in it.

Abu Bakr: In one of the few poems in the collection not written in the first person, a question is raised –
Who should succeed The Prophet?
Neither branch of Islam yields…
– and comments, in reflecting on the conflict between Sunnis and Shiites over the rightful succession to Mohammed –
… Silent
violent ambush after ambush spills our
blood. For whome, Allah?

Harum-al-Rashid: In this tribute to the enlightened Abbasid Caliph of the ninth century who ruled over the Golden Age of Islam –
Poems rise up from the page like unicorns

Maimonides: After acknowledging his reverence for Aristotle,
the champion of eternity: There never was Creation,
there’s no end
the great medieval Jewish philosopher reflects on its impact upon Biblical ideas –
… I, physician, rabbi – I
mourn Eden, the forsaken bride
– those two “I’s” framing the sense of inclusion and regret, the sense of loss, but succeeding obligation to reconcile the Greek and Hebraic visions, that frame the Maimonidean project.

Tomas de Torquemada: As to the notorious director of the Spanish Inquisition –
torture lies
in the palm of my mind
– And yet, in the poignant capstone of the lyric –
My mother’s mother used to
read to me from pages in her rusty Haggadah
– a sobering reminder that this ecclesiastical mass murderer of Jews came from a conversofamily and had a Jewish grandmother.

Erasmus: What a great little summary of a life view –
… I’m tired of wine and wafers,
conversations with the monks, puppets
with no valves inside their souls.
– Don’t you love that convergence of valves and souls? It’s such an exacting opposition of images of the sort that makes for great poetry. It makes me want to routinely ask people whether they have valved souls! And then, in the coda –
I’m most content alongside those like me,
uncertain, as is God.
– Great! If anything is ever attributed to God it is usually not uncertainty, but isn’t that a fabulous idea? A reflection on Erasmus’ hovering between Catholoicism and Protestantism, it’s an historically faithful rendition, but caps it with wonderful and appropriate irony.

The False Messiah: In the voice of Shabbetai Zevi, the false messiah of the seventeenth century –
I’m graceful as the antelope – my
beard is blond, my blue eyes brilliant.
The Sultan’s cast a bronze of me
– the sweep of the lyric casts a spell, much like the glowing personality it represents, its lilt and sway an intoxicant, a redirection from the critical sensibility which might call its veracity into question. That is left, in part to –
Did you not hear the seagulls call:
The wisest man, the world is small!
– As though the self-besotted protagonist of the poem misread the word “caw” for “call.” The seagulls, after all, really knew, but his own ears were inured to hearing their caw-call.

Spinoza: In a beautiful encapsulation of the great seventeenth century philosopher’s view of the world in response to a traditional Jewish upbringing –
I hear Him, hear Him in the Waterfall; see Him, see
Him in the Dawn; smell him in the Forest. He didn’t,
couldn’t make the Universe. He rode in within it.
– What a great idea – riding in within it – conjoining in its imagery the sense of unity between God and world and the notion of creation not as a bursting forth but an entering in.

God: In this deeply ironic capstone piece to a theologically inspired series of poems, Frankel both admonishes and appeals, miraculously in the voice of the almighty –
I am your greatest blunder
– he begins – how wonderful – a deeply self-questioning God –
I’ve lain through centuries,
weeping,
disappointed
in your wishing to trade worship
for a bar of gold, the spoils of war,
the lottery, how much more
– who laments, in subtle rhythms, almost a ditty, the failures of a world to live up to its creation. And how wonderful is the idea of that created God now speaking, reflecting on its own existential dilemma, realizing that an assured existence relies only upon a realization by those –
who made me
in your image
– What a great, contradictory set of ideas, forcing thought to a wild place. And, in the last line of the poem and of the book –
Your praise
is like bone china chipped to sentiment alone
– At once a dire reflection on the limits of human capacity to envision the divine, and, at the same time, an expression of hope – that there is such a thing as bone china, that indeed we might not chip it, or learn not to, that we can, through some avenue of understanding and realization, remove our addiction to sentiment and learn to cultivate what one might think of as a poetically honest sense of the divine.